A downloadable tool for Windows

Did you ever load a game on your ZX Spectrum and went like “hey, these colours look odd and not at all like the screenshots I saw in reviews”, even after you loaded it after having just reset your Speccy?

If so, there’s a fair chance that you have a ZX Spectrum Next, ZX-HD, ZX Uno, a SLAM+ ULA replacement or ZX Vega and you loaded a game created with a tool called Arcade Games Designer - AGD for short. Since its first release in 2008, over one hundred (and counting) games have been created with it.

{the following is an extract from a comprehensive article with more thorough information and images that I prepared for you and is included in the download; see its first page on the right.}

Starting from version 2.3 (that came out 10 years ago) AGD is supporting ULAplus. Which is great because it enables AGD developers to create a ULAplus enabled version and choose from a palette of 256 colours. To demonstrate and promote (part of) the abilities of ULAplus, the developer of AGD, Jonathan Cauldwell, gave all new AGD projects a non-standard ULAplus colour palette by default.

But because ULAplus colours are only displayed when there’s actually a ULAplus available (just like with AY music), and most developers create games in an environment (either real hardware or an emu with ULAplus switched on) that doesn’t have ULAplus, they are not seeing that colours will actually be different for ULAplus.

So developers basically have been creating 'trouble' without realizing it. You can compare it to 48k and 128k Spectrum models and a development environment that, when creating music on a 48k, automatically creates AY music, but in different octaves. Which will sound 'strange' when played on a 128k.

That's why most of the with AGD developed games unintentionally show 'strange' colours on ULAplus enabled devices such as the ByteDelight ZX-HD, Zaxon SLAM ULAplus drop-in ULA replacement, ZX Uno and ZX Vega.

And, as so many games have come out created in AGD since it implemented ULAplus, you will experience these strange colours in all of those games.

I'm in dialogue with the developers maintaining the different AGD development editions about how we can create a solution for this for future games.

To fix the issue in AGD games that are already published, I present you:
non-ULAplus AGD Games Colour Fixer. It gives people with a ULAplus enabled device the opportunity to play games that were not developed for ULAplus in the original Spectrum colours - as the developer actually intended for it to look.

Simply drag one or more of your games' .tap, .tzx, .trd or .scl on the app window, and it will create a copy that will use the standard Spectrum colours in the same folder as the game.
You can see what happened to which file by clicking on the > button on the right side of the app's window. There it displays every action that occurred since the last start of the app.
For a complete historical record, the log file (created in the app's folder) can be opened in your default text editor by choosing Help / Log from the menubar, right-clicking on the app's window or opening it yourself from Windows Explorer.

If you appreciate the time I put into researching and creating this and it is helpful to you, perhaps you'd like to express it by leaving a tip for a cup of coffee, a salad or ... 🙂
That way I know that it's appreciated and motivates me to write other articles and helpful apps. Thank you in advance 😃 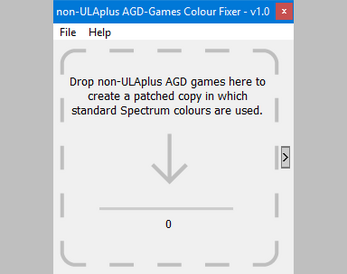 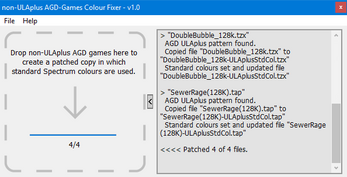 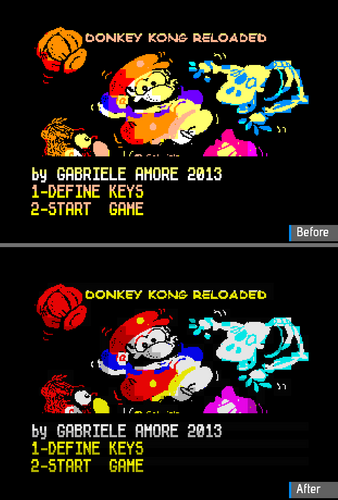 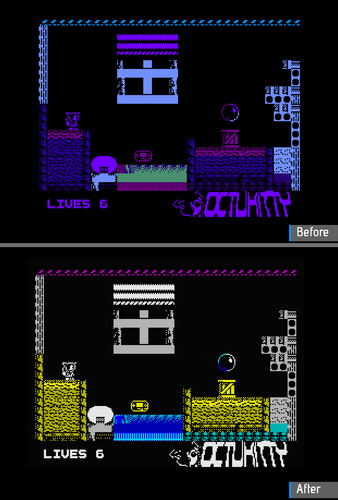 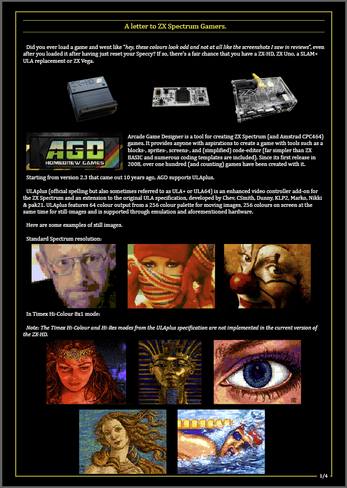